REQUEST A LAWYER
Thank you for contacting LawLinq!

We're working hard to find the perfect lawyer match for you. You will hear from us or one of our network lawyers ASAP!

A recent study by the Center for American Progress found that around one in every three LGBTQ Americans has faced discrimination of some kind in the past year. More than half of LGBTQ people in the United States have hidden personal relationships or changed other aspects of their lives to avoid discrimination.

It is unlawful for anyone at work to take adverse action against, abuse, or harass LGBTQ employees in California. While there are currently no federal protections in place for workers due to their sexual orientation or gender identity, California is a state that prohibits this type of discrimination expressly.

Although employment discrimination based on sexual orientation is slowly becoming a growing body of law, discrimination, and harassment against workers who identify as members of the LGBTQIA+ community continues in many workplaces today. Luckily, there are legal options.

If your case qualifies, a Los Angeles LGBTQ discrimination lawyer can assist you in pursuing recovery through an employment discrimination claim where you can get reimbursed for damages you incurred due to workplace harassment or discrimination. 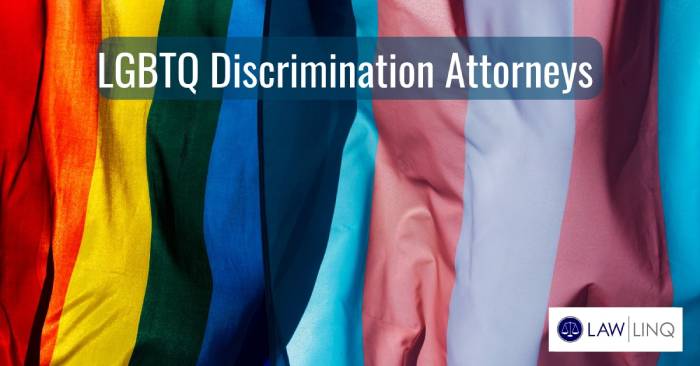 What Qualifies as LGBTQ Discrimination in California?

Harassment and discrimination based on an employee’s LGBTQ identity occurs when an employer intentionally fosters or permits a hostile work environment against LGBTQ employees due to their gender identity, gender expression, or sexual orientation.

Victims of this type of employment discrimination often experience emotional and mental anguish, both of which have a detrimental impact on an employee’s ability to fulfill the duties of their job.

It is on the employee to prove that their gender identity, gender expression, or sexual orientation was the reason why they received abusive treatment at work.

California has some of the most stringent anti-discrimination laws in the country, offering various legal protections for employees who identity as gay, lesbian, bisexual, transgender, queer and or intersex.

LGBTQ discrimination falls under the general umbrella of employment discrimination, which involves misconduct against employees or potential employees based on a protected class or characteristic.

Your employer can be held liable for the misconduct of a coworker, manager, or some other actor at work only if they were aware of the discriminatory behavior and did not take any reasonable action to stop it.

The employer is not responsible in instances where they were not aware of the harassment or if they took all reasonable steps to prevent further harassment from occurring.

What are the LGBTQ Rights in California?

California has received nationwide recognition for its protection and inclusion of lesbian, gay, bisexual, transgender, and queer (LGBTQ) rights since the 1970s. Legal protections against discrimination for LGBTQ employees were adopted statewide in 2003.

In 1999, California became the first state in the United States to formally recognize same-sex domestic partnerships. The state has been at the forefront of legal inclusion of LGBTQ rights, with other states following suit over the years.

Although there are still no protections at the federal level for discrimination based on gender identity or expression, things appear to be changing in the judicial system.

In 2020, the Supreme Court issued a landmark ruling which maintained that employment discrimination based on an employee’s sexual orientation or transgender status is unlawful according to Title VII of the Civil Rights Act of 1964. This recent Supreme Court ruling applies to all workplaces with 15 or more employees.

How do I Know if I Have a Case?

If your employer takes adverse employment-related action against you or if they allow harassment at work due to your LGBTQ identity, you should consider contacting an LGBTQ rights lawyer.

This adverse action must alter the conditions of your employment and prevent you from performing well at your job. State and federal laws can protect you from your employer discriminating against you due to any of the following characteristics:

Discrimination at work may be subtle or it may be overt harassment, as it can manifest as ostracization of LGBTQ employees from work events down to wrongful termination.

If you are being mistreated or harassed at work due to your status as a lesbian, gay, bisexual, queer, transgender, or intersex person, you should contact a reputable LGBTQ discrimination or labor attorney to see if you qualify for an employment discrimination claim. 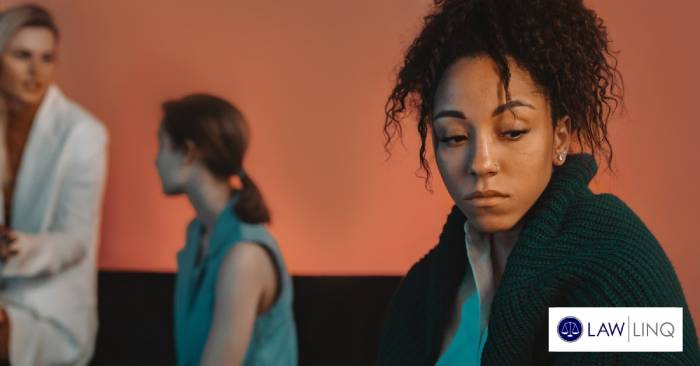 What are Some Example Cases?

Discrimination and harassment can be observed at any stage of employment, including the application and interview process. The following is a list of example scenarios of LGBT discrimination you or a colleague may have experienced in the workplace:

Discrimination and harassment at work are not limited to these scenarios. The key to identifying and proving discriminatory behavior at your workplace is to determine the motivation behind it.

If you are a victim of offensive conduct at work due to your LGBTQ identity or any other protected characteristic, then you may be experiencing employment discrimination. A Los Angeles LGBTQ discrimination attorney can review the events and details of your case to see if you qualify for compensation.

Is it Worth Suing?

If you or a colleague at work are suffering from harassment and discrimination based on your gender identity, gender expression, or sexual orientation, you should take legal action. We recommend that you document everything that you can.

Take note of all communications you have that could prove discrimination motivated by a protected class. Make sure you write down the dates, times, and any witnesses of the discrimination and harassment taking place at your job.

After reporting the situation to your employer’s human resources department, you should consult with an employment or LGBTQ discrimination lawyer who can assist you in your claim.

Some workers fear retaliation from their employers and avoid reporting the harassment they experience on the job. Fortunately, there are legal protections in place for workers who report illegal activity in the workplace.

If your employer fires you for reporting harassment or discrimination at work, then your employer could be held liable for wrongful termination.

In either case, there are plenty of LGBTQ discrimination lawyers in Los Angeles that can help you determine if you qualify for significant financial compensation. No matter the situation, your employee cannot scare you into silence or compliance

Under California state laws, employers cannot discriminate against you based on your sexual orientation or gender identity any more than they may based on the color of your skin.

By not pursuing an individual claim, you could miss out on compensation for any damages you have sustained as a result of employment discrimination.

If you reside in the Los Angeles area and have questions about your case,  LawLinq may be able to help connect you with experienced LGBT discrimination lawyers.

What are LGBTQ Discrimination Cases Worth?

The following are some of the most common damages awarded in LGBTQ discrimination cases:

Keep in mind that punitive damages are only rewarded in the most egregious cases in an effort to both punish offenders and deter others from behaving similarly in their work settings.

Case results can vary and are largely dependent on the unique facts of your case. Depending on your income or what took place, it is possible to receive settlements in the six figures. 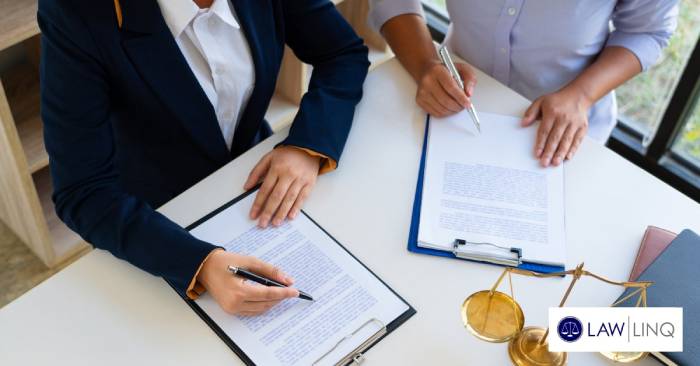 How Can a LGBTQ Discrimination Lawyer Help Me?

LGBTQ discrimination lawyers can assist you in your claim by first reviewing the facts of your case to see if you qualify for financial compensation.

Your attorney can help you begin your claim as well as assist you in the process of reporting your employer to the U.S. Equal Employment Opportunity Commission (EEOC)- which is required to pursue a claim.

A Los Angeles LGBTQ discrimination lawyer can also help you maximize what you could receive in recovery. Finding LGBT lawyers in Los Angeles to work with you on this matter begins with being aware of your rights.

You should contact LawLinq as soon as possible if you believe that your sexual orientation or gender identity has resulted in you being passed over for promotions, denied benefits, or even terminated from your job. We can link you to some of the best LGBTQ discrimination lawyers in the region.

LawLinq’s member attorneys are accomplished and have the expertise needed to hold employers who discriminate against LGBTQ workers responsible for their actions in court.

Their track record speaks volumes regarding their commitment to diversity and inclusion for all groups of people. No matter the type of discrimination taking place in your workplace, our attorneys can help you.

LawLinq can connect you with highly qualified anti-discrimination attorneys for your LGBTQ discrimination case or any other legal matter.

Contact LawLinq and allow us to do the work of finding the right lawyer for your case. Get started by calling (855)-997-2588 or by filling out an online form today.

LawLinq is a California State Bar Certificated Lawyer Referral Service. We're experts at finding the best LGBTQ discrimination attorney to meet your needs and our service is FREE to consumers.

REQUEST A LAWYER
Thank you for contacting LawLinq!

We're working hard to find the perfect lawyer match for you. You will hear from us or one of our network lawyers ASAP!

We’re experts at matching consumers with quality legal representation…and our service is FREE to consumers!

Please note, our lawyers work on a contingency or fee basis but are not pro bono.

YOUR LINQ TO EXCEPTIONAL LAWYERS

LawLinq, Inc. is a California State Bar Certified Lawyer Referral Service - State Bar Certification #134. This website is attorney advertising. Prior results, testimonials or endorsements do not constitute a guarantee, warranty or prediction regarding the outcome of your legal matter. LawLinq, Inc. is not a law firm, does not provide legal advice, comments on legal cases or answer legal questions. If we cannot provide a lawyer referral, we will attempt to provide you with other legal services information relevant to your specific needs. No attorney-client relationship is formed by use of this website or any interaction with LawLinq, Inc. LawLinq attorneys are pre-screened and meet minimal requirements set forth by the service. This service is not paid lawyer advertising. All lawyer referrals are unbiased and impartial.